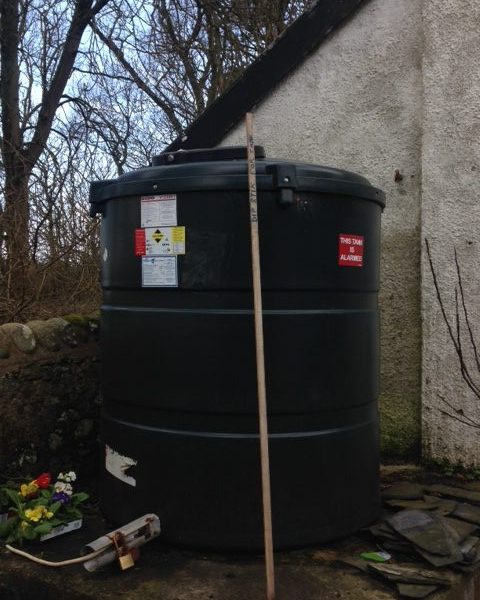 Wind is a regular feature of west coast island life. This month has brought some rather insistently noisy Atlantic storms. Monday night featured the pre-Gareth storm. The Lodge is in a bit of a dip surrounded my mature trees. These create different degree’s of roar and I am learning to guage wind speed by the level of roar. Monday night was a significant roar and merited ear plugs. I also expected the power to go off to torches, candles and camping stove were all looked out. But it tailed off during the night and Tuesday morning was bright and looked promising. The calm before the next storm!

On heading out that morning to release the chickens I noticed my woodstore door was open. I had secured everything the previous night so was surprised. It was then that I noticed the dipstick. Carefully placed on my supply of fuel. It is taller than me and is labelled ‘oil tank dip stick’. A most useful present but I have no idea who has been this thoughtful or indeed discrete. Investigations are underway and have so far not yielded many leads. Jimmy Perez eat your heart out. We only have around 140 folks on the island so I will get there.

At least its not body parts in a plastic bag. And has some use. If only I could climb up a ladder to actually get dipping…..