Get up and Tie your Fingers Eyemouth tells the story of how the people of Eyemouth recovered following the 1881 Fishing Disaster.  The text was specially written by Ann Coburn with an adapted score by Karen Wimhurst.

The production used song, storytelling, and dance to illustrate the courage and resilience of communities in the face of unimaginable tragedy and the hope that follows.  It is a story which still resonates today,  in fishing communities such as Eyemouth and in any community recovering from loss.

50 members of the community, from across Eyemouth and the surrounds, worked together to create, produce and perform this unique production which uses song, storytelling, and dance to illustrate the courage and resilience of communities in the face of unimaginable tragedy and the hope that follows.  Thanks to Creative Scotland for their funding support, as well as Eyemouth Museum, and Live Borders Touring. 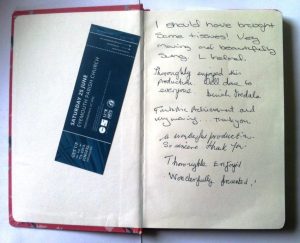 It was performed on 25 and 26 June 2016 in Eyemouth Parish Church with over 450 audience attending over three performances.

The cast came together again to sing at the unveiling of the Widows and Bairns Memorial Statue on Friday 14 October 2016. This was 125 years to the day since the disaster and involved many descendants of those lost.

Get up and Tie Your Fingers Eyemouth was produced by Ellie Logan (Producer and Musical Director) of SeaSang productions, in collaboration with Fiona MacPherson (Director) from Guild of Lillians and Liz Pavey (Choreographer)  from University of Northumbria and of course the community themselves.